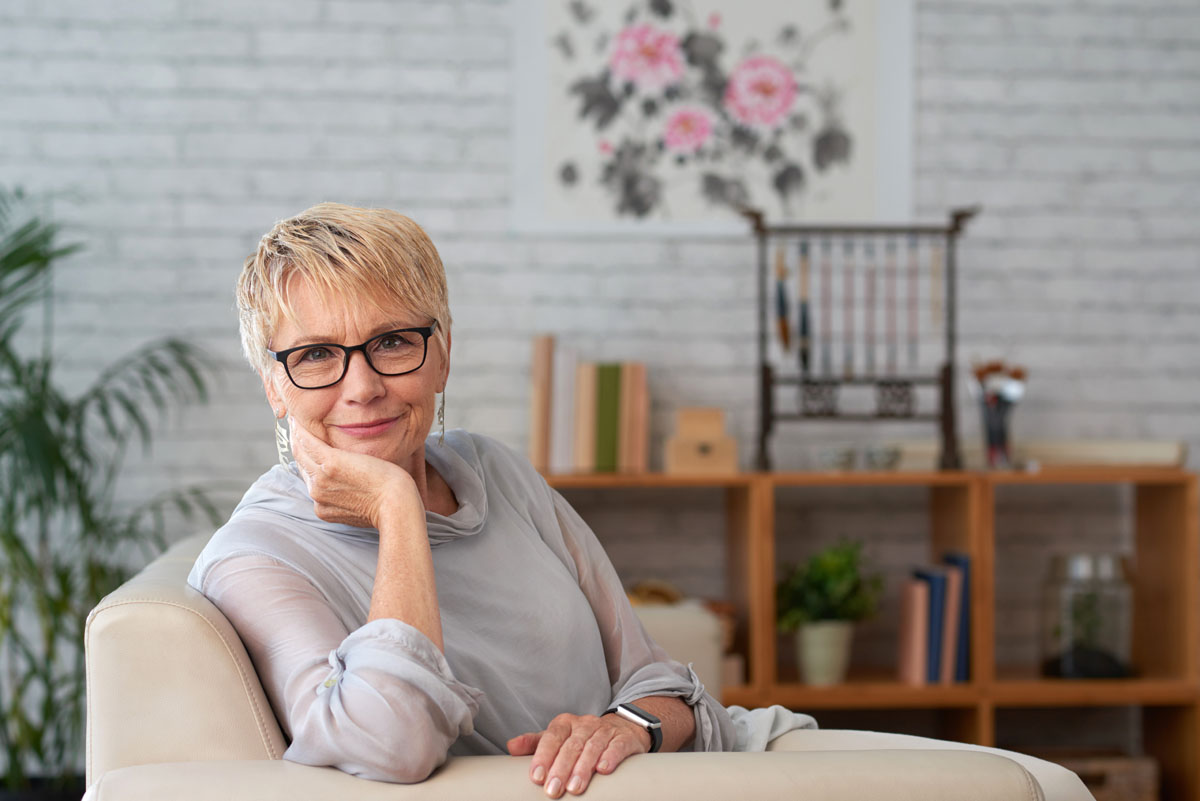 Have a senior friend or family member and want to make them laugh? Tell them one of these rib ticklers!

A man and woman had been married for more than 60 years. They had shared everything. They had talked about everything. They had kept no secrets from each other, except that the little old woman had a shoe box in the top of her closet that she had cautioned her husband never to open or ask her about. For all of these years, he had never thought about the box, but one day, the little old woman got very sick and the doctor said she would not recover. In trying to sort out their affairs, the little old man took down the shoe box and took it to his wife’s bedside. She agreed that it was time that he should know what was in the box. When he opened it, he found two crocheted dolls and a stack of money totaling $95,000. He asked her about the contents. “When we were to be married,” she said, “my grandmother told me the secret of a happy marriage was to never argue. She told me that if I ever got angry with you, I should just keep quiet and crochet a doll.” The little old man was so moved; he had to fight back tears. Only two precious dolls were in the box. She had only been angry with him two times in all those years of living and loving. He almost burst with happiness. “Honey,” he said, “that explains the dolls, but what about all of this money? Where did it come from?” “Oh,” she said. “That’s the money I made from selling the dolls.”

Last year, I replaced all the windows in my house with those expensive double pane energy efficient kind. But this week, I got a call from the contractor complaining that his work had been completed a whole year and I had yet to pay for them. Boy, oh boy, did we go around! Just because I’m blonde doesn’t mean that I am automatically stupid. So, I proceeded to tell him just what his fast-talking sales guy had told me last year. He said that in one year, the windows would pay for themselves. There was silence on the other end of the line, so I just hung up, and he hasn’t called back. Guess he was embarrassed.

A wife was making a breakfast of fried eggs for her husband. Suddenly, her husband burst into the kitchen. ‘Careful,’ he said, ‘CAREFUL! Put in some more butter! Oh my gosh! You’re cooking too many at once. TOO MANY! Turn them! TURN THEM NOW! We need more butter. Oh my gosh! WHERE are we going to get MORE BUTTER? They’re going to STICK! Careful. CAREFUL! I said be CAREFUL! You NEVER listen to me when you’re cooking! Never! Turn them! Hurry up! Are you CRAZY? Have you LOST your mind? Don’t forget to salt them. You know you always forget to salt them. Use the salt. USE THE SALT! THE SALT!’ The wife stared at him. ‘What in the world is wrong with you? You think I don’t know how to fry a couple of eggs?’ The husband calmly replied, ‘I just wanted to show you what it feels like when I’m driving.’

An out-of-towner drove his car into a ditch in a desolated area. Luckily, a local farmer came to help with his big strong horse named Buddy. He hitched Buddy up to the car and yelled, “Pull, Nellie, pull!” Buddy didn’t move. Then the farmer hollered, “Pull, Buster, pull!” Buddy didn’t respond. Once more the farmer commanded, “Pull, Coco, pull!” Nothing. Then the farmer nonchalantly said, “Pull, Buddy, pull!” And the horse easily dragged the car out of the ditch. The motorist was most appreciative and very curious. He asked the farmer why he called his horse by the wrong name three times. The farmer said, “Oh, Buddy is blind and if he thought he was the only one pulling, he wouldn’t even try!”

I feel like my body has gotten totally out of shape, so I got my doctor’s permission to join a fitness club and start exercising…. I decided to take and aerobics class for seniors. I bent, twisted, gyrated, jumped up and down, and perspired for an hour. But, by the time I got my leotards on, the class was over.

A woman brought a very limp duck into a veterinary surgeon. As she laid her pet on the table, the vet pulled out his stethoscope and listened to the bird’s chest. After a moment or two, the vet shook his head and sadly said, “I’m sorry, your duck, Cuddles, has   passed away.” The distressed woman wailed, “Are you sure?”   “Yes, I am sure. Your duck is dead,” replied the vet. “How can you be so sure?” she protested. “I mean you haven’t done any testing on him or anything. He might just be in a coma or something.” The vet rolled his eyes, turned around and left the room. He returned a few minutes later with a black Labrador Retriever. As the duck’s owner looked on in amazement, the dog stood on his hind legs, put his front paws on the examination table and sniffed the duck from top to bottom. He then looked up at the vet with sad eyes and shook his head. The vet patted the dog on the head and took it out of the room. A few minutes later he returned with a cat. The cat jumped on the table and also delicately sniffed the bird from head to foot. The cat sat back on its haunches, shook its head, meowed softly and strolled out of the room. The vet looked at the woman and said, “I’m sorry, but as I said, this is most definitely, 100% certifiably, a dead duck.” The vet turned to his computer terminal, hit a few keys and produced a bill, which he handed to the woman.. The duck’s owner, still in shock, took the bill. “$150!” she cried, “$150 just to tell me my duck is dead!” The vet shrugged, “I’m sorry. If you had just taken my word for it, the bill would have been $20, but with the Lab Report and the Cat Scan, it’s now $150.”

A man is dining in a fancy restaurant and there is a gorgeous redhead sitting at the next table. He has been checking her out since he sat down, but lacks the nerve to talk with her. Suddenly she sneezes, and her glass eye comes flying out of its socket towards the man. He reflexively reaches out, grabs it out of the air, and hands it back. Oh my, I am so sorry, ” the woman says as she pops her eye back in place. “Let me buy your dinner to make it up to you, ” she says. They enjoy a wonderful dinner together, and afterwards they go to the theater followed by drinks. They talk, they laugh, she shares her deepest dreams and he shares his. She listens. After paying for everything, she asks him if he would like to come to her place for a nightcap and stay for breakfast. They had a wonderful, wonderful time. The next morning, she cooks a gourmet meal with all the trimmings. The guy is amazed! ! Everything had been SO incredible! !! ! “You know, ” he said, “you are the perfect woman. Are you this nice to every guy you meet? ” “No, ” she replies… “”You just happened to catch my eye.”

Hospital regulations require a wheelchair for patients being discharged. However, while working as a student  nurse, I found one elderly gentleman–already dressed and sitting on the bed with a  suitcase at his feet–who insisted he didn’t need my help to leave the  hospital. After a chat about rules being rules, he  reluctantly let me wheel him to the elevator.  On the way down I asked him if his  wife was meeting him. “I don’t know,” he said.  “She’s still upstairs in the bathroom changing out of her hospital gown.”

A middle aged woman had a heart attack and was taken to the hospital. While on the operating table, she had a near death experience. Seeing God, she asked, “Is my time up?” God said, “No, you have another 43 years, 2 months and 8 days to live.” Upon recovery, the woman decided to stay in the hospital and have a face lift, liposuction and tummy tuck. Since she had so much more time to live, she figured she might as well look even nicer.After her last operation, she was released from the hospital. While crossing the street on her way home, she was hit and killed by an ambulance. Arriving in front of God, she demanded, “I thought you said I had another 40 plus years? Why didn’t you pull me out of the path of the ambulance!?” God replied, “My child, I am sorry, I didn’t even recognize you!

An elderly gent was invited to his old friends’ home for dinner one evening. He was impressed by the way his buddy preceded every request to his with endearing terms-Honey, My Love, Darling, Sweetheart, Pumpkin, etc. The couple had been married almost 70 years, and clearly they were still very  much in love. While the wife was in the kitchen, the man leaned over and said to his host, “I think it’s wonderful that, after all these years, you still call your wife those loving pet names. “The old many hung his head. “I have to tell you the truth,” he said, “I forgot her name about 10 years ago.”